As the holidays approached, the one thing I was most looking forward to decorating this year was this little silver Christmas tree. 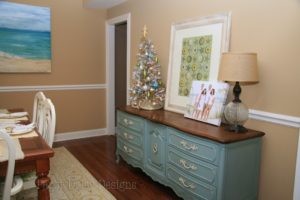 I picked it up at the end of season sale at Wal-Mart.  I never opened the box until a week or so ago.  From the photo on the box, I assumed it was a cute little retro tensil tree. Well, to my surprise it is quite the disco ball, psychedelic number.  Obviously I’ve dolled her up to hide her true tendencies. 🙂

Now onto the ornaments.  Once it was decided that the tree was going in the dinning room I thought it would be fun to have a few coastal themed ornaments.  I had this crazy idea in my head that it was going to be easy to find ornaments that were kind of coastal at craft stores and the like,  But apparently I forgot I live in the mid-west and coastal trees aren’t the rage here.
So of course I had to make some of my own.  I started with these glass balls, well they aren’t really balls. they are kind of flat.  I was going to swirl the inside of them with Duck Egg Annie Sloan Chalk Paint to match the dresser, but then decided because they were more flat than round, I could glue something to the outside.  Enter the infamous junk drawer, where I had a stash of sand dollars Miles brought home from a trip to the beach before we moved here. 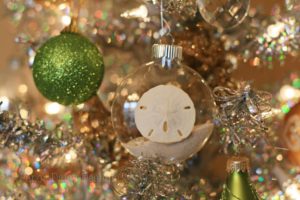 I simply used Gorilla glue to adhere the sand dollar onto the ornament. I also poured sand and small shells from this summer’s trip into them. (And see, up-close, the tree is quite psychedelic.)
I did end up using the Chalk paint to cover chipboard birds from GCD Studios that I glittered. 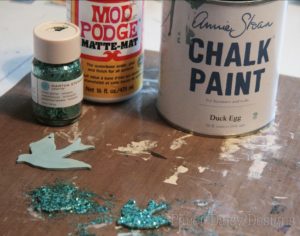 The other especially beautiful ornaments on the tree are antiques from my mother-in-law.  I’m happy they have a safer spot on this little tree.

Breaking the room down, corner hutch