The weird and the cool

3
Tuesday was the day to encounter weirdness of the animal kind.  I don’t have a photo of the first incident, but the second was easy to photograph.

I had to pick Miles up from school because his bus broke down. No big deal really except it is way across town, and I had just got home from picking up Emily (whose school is much more conveniently located).

The drive to and from his school crosses over downtown.  We were at a red light on a major intersection when I saw what I initially thought was a rock, but the rock moved quickly and then I thought it was a leaf.  Nano seconds later I realized what it was… a mouse! It was crossing a busy 4 lane street in the middle of the afternoon!  It was weird and kind a gross ! But you know what was weirder?  It crossed with no problems as if it knew the traffic had stopped because of a red light and there weren’t cars crossing in the other direction. For the rest of the after noon I kept thinking about how that the old story “The City Mouse and the Country Mouse” is quite possibly a plausible tale. 😉

The next occurrence wasn’t that weird in all honesty. It’s not like we hadn’t seen a turtle in our neighborhood before, in fact we had seen one the day before on a run. 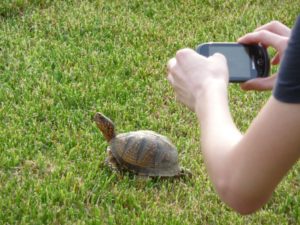 But this turtle seemed too big to fit in between our fence slats or under it.  I’ll have to do some investigating as I plan on putting out my vegetable garden this weekend and I’d like to avoid thieves!

The only reason we found the turtle is because Tucker spot it and was going crazy by the backdoor.  We all went outside ahead of him to photograph it and then let the crazy dog loose! 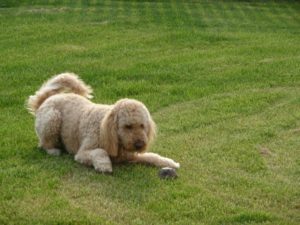 He sniffed, and danced and then started barking at the poor turtle. I think if it had been a little smaller he may have picked it up and ran around with it.  Silly dog!

Now for the cool.  I got an email from Adobe the other day announcing an update to Photoshop and touting their new iPad apps.  I went to check it out and I was floored!! 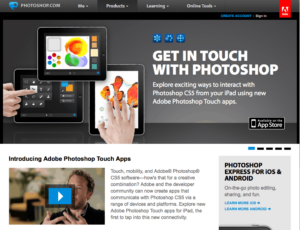 If I thought I was excited about getting an iPad before, as I’m not so patiently waiting for it to come, I’m dying with anticipation now.  I know this app is going to be so useful and helpful to me not to mention, just plain fun,  I’m just beside myself with the possibilities and the sheer coolness of these apps!

The other cool email I got was from Photojojo.   Go check these out. (you can click on the screen shot) Lots of mentions of Instagram and Hipstamatic but there were several others that looked cool that I hadn’t heard of. 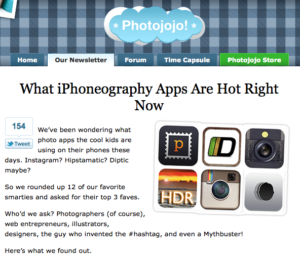 Well, need to get to my workout. I’ve procrastinated long enough. At the encouragement of Lisa’s post about Juillian’s Ripped in 30 days dvd, I bought a copy the other day.  Now, I really don’t imagine I’ll be ripped in 30 days because I’m not doing it everyday, only on my days off from running.  I do think after one session, that “Tortured Muscles for 30 Days” is a more appropriate title. 😉  I woke up slight sore after the first day and thought to myself, “well, this is doable.”  Then I went for my run and hours later I was dying, soreness of the kind that you cringe when something falls on the floor because you know it’s going to really hurt to pick it up!

A lovely day and some sneaks!