1
When Emily and I decided to make paper poms as decorations for her “Fancy Fourteenth” birthday party, I found plenty of tutorials online. And while they gave the basic instructions, after making them I honestly felt they left out some important tips, tips that a perfectionist like me would like to know. 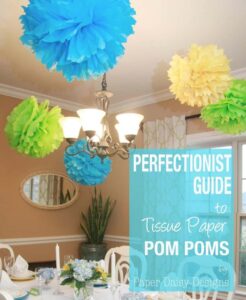 The pom poms with the largest paper size in this photo are the green ones.  I called them the green monsters. See the green one on the right, doesn’t it kind of remind you of Oscar the Grouch? 🙂 Too me, they just weren’t as pretty as the smaller ones. The reason we had varying sizes wasn’t because I was clever enough to plan it that way.  It’s because we were looking for particular colors and bought the tissue paper from various stores around town. (Target, Wal-mart, Party City.)

I don’t have the packaging anymore, but from measuring the pom poms, I’d figure that one side of the rectangle of tissue was at least 19″,  and not all of the packages had square sheets of tissue paper.  The blue one is a little smaller in diameter, around 18″ and doesn’t look as bad. I think that’s because I used a rounded edge instead of pointed.

The yellows were our favorites, in fact I loved them so much, I hung them in a corner of my studio after the party. Their fullness is in proportion to the size and I think that is the key. We also loved the pointy edge.    The blue and greens would have looked equally as good if they were fuller by using more sheets.  Probably only 2-4 more sheets would have done the trick.

And after all that advice, Here’s where I’ll start the actual tutorial. 🙂 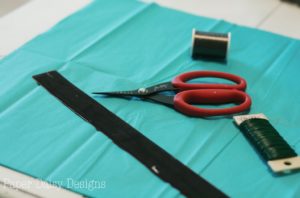 Step 1: Assemble your supplies: tissue paper, a ruler, heavy duty scissors, wire and in our case we used invisible thread.  I liked that look much better than ribbon.  I think the poms should look like they are floating. 😉 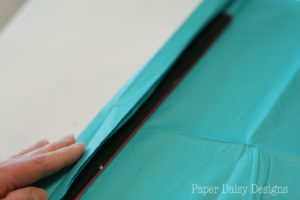 Step 2: Fold the tissue paper accordion style as if you were making a paper fan. I folded the paper with a ruler as my guide for width of the fold.  I moved the ruler to the inside every couple of folds.  I didn’t do this for all of the pom poms and found the folds to be inconsistent.  Of course I didn’t realize it until the end.  This isn’t really all that important until later…. 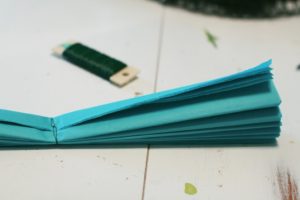 Step 3: After accordion folding the whole sheet, wrap floral wire around the paper in the center.  Check to be sure it’s the center so your pom pom doesn’t hang wonky.

As you fold or especially once your fan looks like the one above, you want to really score the fold. I ran the ruler along the edges firmly. 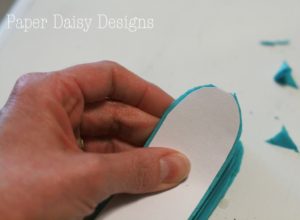 Step 4: Cut an edge on the fan.  For the curved edge, I figured it would be too hard to make an even curve on both sides so I cut a template out of scrap paper.  This is where the heavy duty scissors were important. Even with those scissors, I had to flip the template over and cut the back side as well.

And then I noticed this… 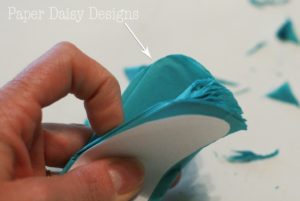 You see how even though the papers seem to be the same shape, the fold was in a little and so the edge didn’t come down as far.  I did a little touch up in areas like this too.  Now maybe you think that’s a little crazy, will anyone really notice that?  I don’t know, but I figured it was better to have them all the same shape.

The other end shape we used was just a point. Basically I cut a triangle, or arrow head on the end.  This was much easier to do and we liked this edge just as well. 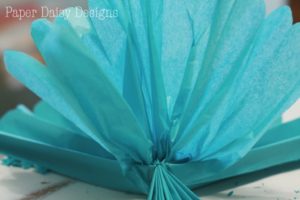 Step 5: Fluff the papers on one side of the fan.

As Emily was helping me, she noticed that mine were looking better than hers. And I couldn’t figure out why at first and then upon inspection, I saw that she hadn’t pulled her first paper very tightly to the edge of the wire. 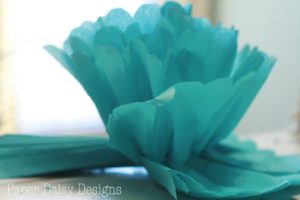 Keep fluffing in one direction for half of your papers, so in this case 4 sheets.  Then you flip it over and go the other direction. 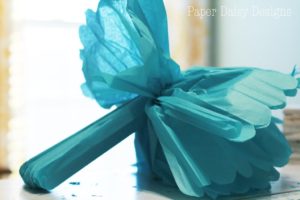 Step 6: Flip the whole thing over and fluff in the same manner you did on the first side. 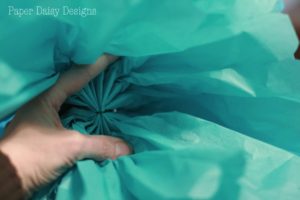 Step 7: Run string or invisible thread through the center of the pom pom by separating the sheets apart a little..  You’ll need to re-fluff it once you’ve got it strung. 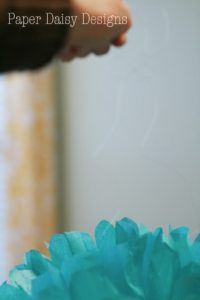 Step 8: Tie a knot at the end of your string and hang.  We chose to use straight pins with little plastic heads.  Once we stuck them in the ceiling, we just bent them into an “L” and the string hung fine.  If you have some with white heads you really won’t notice them on the ceiling at all.  We did one with a red head and it was pretty noticeable. 😉 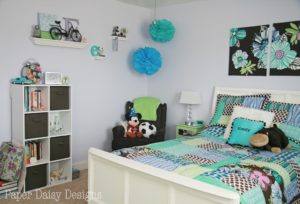 Hopefully, this will be helpful to you. I know I totally made them sound much more complicated than they are, but I wanted to share tips that I wish I would have known before I started. 🙂

Under all this snow...

Want to bring a few touches of spring into your ki

Spring has been making it’s way into the living

I made a promising discovery in the backyard yeste

Now that spring has temporarily stepped back from

Hope you are enjoying a bit of spring this week! T

Creating a multi functional space in our laundry r

It’s official. 🌸I have spring fever.🌸 The