You are here: Home / Uncategorized / Trying for clean and making flowers

Recently I’ve tried to incorporate more clean eating into our lives. Generally speaking, I already purchased mostly organic products and rarely use processed foods in my meal preparation so it hasn’t been difficult. Not going for hard core here. My family, besides Emily and me, just couldn’t handle it and I’m not up for that fight. (Clean eating is based upon eating organic and no processed foods popularized by Tosca Reno.) I just checked out the Eating Clean for Families and Kids book at the library and have been trying out some of the recipes.

This weekend Emily and I made hummus, which we have both always loved. I made a few modifications from Reno’s recipe, a little less fat and garlic powder. (I was just too lazy to mince garlic that day.) It was fabulous. Emily prepared her pita for lunch and declared I must take a photo to share on my blog! Can you believe that girl? Here’s her pita with some of her veggies. Cute huh? This is what food preparation with kids is about!! I recently got some new restaurant equipment at Nella Food Equipment and I’ve been wanting to test it out. 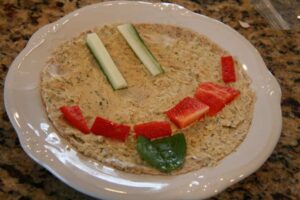 She did add some more spinach, cucumbers and red peppers before she ate it. 🙂 We also had made yogurt cheese the day before and it was the absolute perfect accompaniment to our hummus.

Last night, I attempted to make soy burgers also from the Reno book. I couldn’t find dry soybeans at any of my grocery stores, so I used fresh frozen. I didn’t realize the beans should still have been cooked for over an hour. Once I had cooked them for 45 minutes, I was hungry and figured they were cooked to almost soft and it would all work out. The burgers didn’t really look like they were binding together all that well, but actually once they finished cooking in the oven they were sticking together much better than I first thought. But before I realized this, I added a can of pureed chickpeas to the remainder of the burger mix and cooked a couple of those in a pan to see how that worked. I liked those even better and will probably add the chickpeas to my final recipe. (I’ll make a recipe post later in the week, as I made a few other changes as well.)

All of this is cooking was part of my effort to eat more vegetarian. I’m not really committed to becoming a vegetarian, but eating less meat. I recently read parts of a book called Food Matters: a Guide to Conscience Eating by Mark Bitman. In his book, he describes at length of the environmental impact of the amounts of meat we eat. And while I don’t agree with everything in his book, I have seen the documentary Food, Inc. and it only reinforced what I thought about eating organic and closer to the earth. Anyway, the thing that did totally appeal to me from his book was his goal of eating meat only after 6pm. I had never considered this approach to eating and it struck me as a very doable thing for me given my families eating habits. And truthfully, it wasn’t too far off from what I was already doing.

It’s been a fun and healthy experience so far. I love that Emily is jumping on board as well. She had initially balked at the idea of eating my veggie burger and asked me to defrost some soup for her to eat instead, but once they were cooked she made her burger and started contemplating how she could pack it for lunch at school!!

I did do a little scrapbooking this weekend. I made these flowers inspired by the fabric flowers I’ve been seeing popping up everywhere, like the ones here. I wanted to make mine out of the same paper I was using on the layout. So, I crumpled a strip of paper up and spritzed it with water and started gluing it down. Definitely will do it again. I love the distressed look. 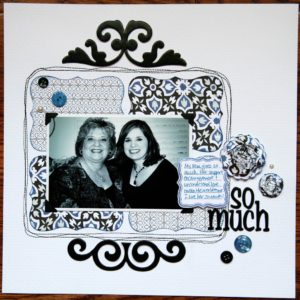 Mom, I Love you so much!!
Here’s a close up of the flower. 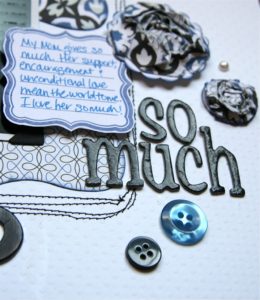 I’m off to enjoy a veggie burger for lunch and run some errands. So glad the snow from last night is almost all gone!!
Thank you for subscribing to Paper Daisy Designs. Please continue reading on the blog. I appreciate having you as a reader.

« Good, good things
Friday is even better, doing our part » 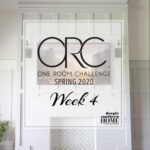 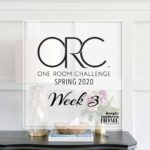 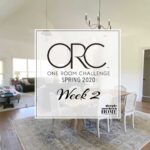 Happy to be home from a long week of DIY projects

Going back a little for today’s #transformationt

Layers. I am always drawn to styling that includes

The best way to add instant charm and character to

Landscaping is a wise investment in time and money

After a teaser a few weeks ago, I finally shared t