Behind the scenes of a Backyard makeover

1
Although I don’t often share in-depth behind the scenes of a project, our recent backyard project had a few unexpected twists and turns that I think some would find interesting and maybe even informative. 😉

This is the way it looks in the lovely after shot.  Can I tell you how much we love this space? We do love it! Here’s a link if you’d like to see the whole reveal. 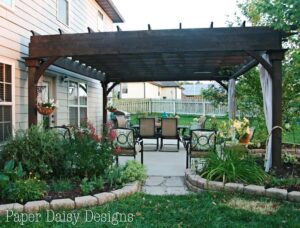 Now don’t misunderstand me. I’m not above sharing when things don’t go right. It’s not that at all.

I didn’t share all this during the reveal because the post would be entirely too long.  No one wants to read a novel length post about a backyard makeover!

The chairs and the table makeovers went swell.  No problems there. You can see more about them here and here. 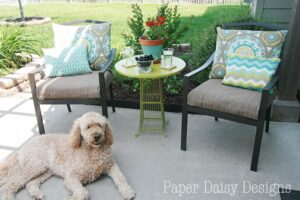 One of the the most disgusting things we discovered after pressure washing the pergola was the residue left behind. Yuck! 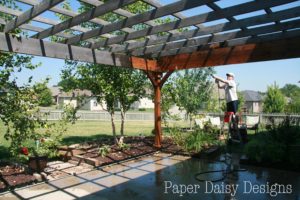 We were smart enough to move the things from underneath the pergola, but the pressure was so strong that some of the chairs a good 5 feet away still got gunk on them.

Having never power washed a deck or anything like that before, we had no idea what to expect as far as runoff or spray off as it probably was.

Boy, were we in for a rude awakening! This basil plant shows, even after a good hosing, what I can best describe as sawdust laced with mildew. That literally made me itch!

It took hand scrubbing each individual leaf to get most of the plants completely spotless. 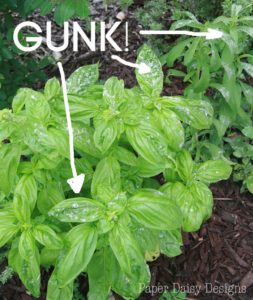 After several attempts to be rid of the gunk, washing things down with bleach, hosing off the piles of gunk off the gravel walkways, we thought we had it conquered the gunk. Gone. All clean.

We even went ahead and stained the pergola. And then, a few days later, it rained.

Every piece of furniture, every potted plant, every thing under the pergola, had little flakes of the gunk on them again.

Turns out the “dandruff” was coming from the top side of the pergola that we didn’t stain and I just knew that every time it rained for the next several weeks, we would be dealing with this pesky stuff.

My poor husband did what any good husband would do in this case.  He moved everything out from under it and climbed on top of the pergola to hosed it off for, hopefully, the last time. 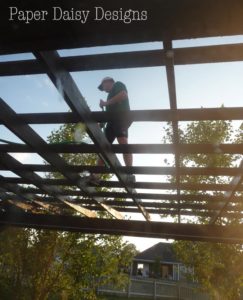 I am seriously afraid of heights, so there was no way I was climbing up there! But thankfully he did and the problem was solved.

Speaking of heights, I had a hard enough time handling standing on a table to stain the pergola. Yeah, I’m that bad.

Here’s what the area looked like during the staining. My husband used those two ladders most of the time and I stood on the table. I was very careful and very mindful of where I was stepping to make sure I didn’t step off. 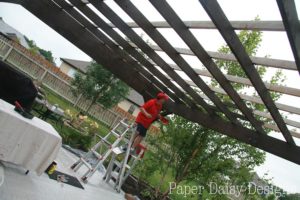 We had been warned that the staining process is very messy and we covered just about everything we could. 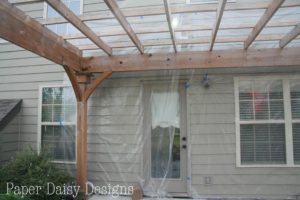 When our goldendoodle Tucker came outside with us, I wanted to cover him too!  I don’t think he minded laying on top the plastic drop cloths at all. 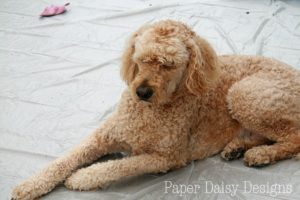 Even with all that plastic, we still managed to stain the patio in one spot, a few spots on the edging  and one plant got totally doused in stain. Oh, well.

But overall, the staining process went pretty smoothly.  Time consuming, yes?   Did the house get neglected during those two days? Yes!

Take a look at the kitchen sink! 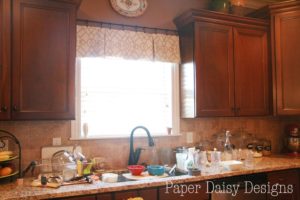 But what could have been the worst makeover scenario ever, was completely my own doing.

I was able to convince my husband into staining the pergola, after years of saying he would never do it, because we had nearly a full gallon of stain left over from revamping the outdoor table. 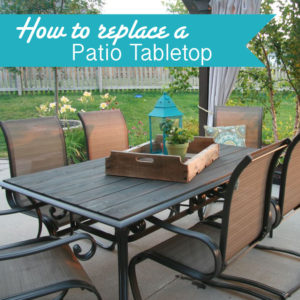 But for the pergola, I wanted to darken and warm up the color a bit.  The finished tabletop had some green undertones that I thought would be very noticeable on something as large as a pergola.

So, we took the stain back to the hardware store and asked the paint guy to add some tint to the, almost full gallon, of stain.

The paint guy said to me, while the stain mixed in that contraption they mix paint in, for about the fifth time, “Now, if you end up needing more, just put some stain on a white piece of paper and we’ll match it.”

After a little miscommunication between the two of us, when he thought I said I wanted it lighter not darker, he finally achieved the color I was looking for.

Happy, Happy I was with the new stain color and we left.

Of course, we got about half way done staining the pergola and didn’t have enough stain.

No problem. I did as I was told. I applied some stain to a piece of paper and brought it back to the store.

The paint guy working that day about flipped when I told him what I wanted.  He said that he couldn’t color match a semi-transparent stain! And of course this when I realized the first guy didn’t keep the formula of the custom color we had created.

The paint team working that day were super gracious though and worked with me for over an hour to get as close as they could to a match.

Our saving grace in this whole deal was how we tackled the project. We applied the stain on boards going in one direction and one complete side of a board at a time.  Because of the way the sun hits the different boards you can’t tell at all.

Honestly, you can’t tell. I remember all to well which ones we did first, and I can’t tell. 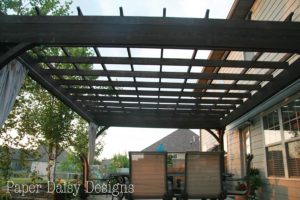 I also think we got pretty darn lucky. This could have been a two toned disaster.

But in the end we couldn’t be happier with the way it turned out.  My only regret is that I didn’t convince my dear husband to do this sooner. 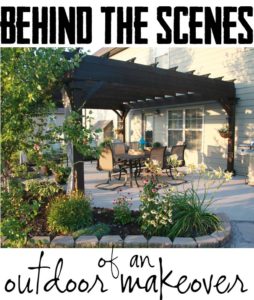 I hope this” behind the scenes” gives you some information you find valuable in your own projects.

Have you had a similar fiasco?  I’d love to hear.  We all have lots to learn!

I’d love to have you follow me along on my journeys!