5
Because I did a Halloween mantle this year, my Fall mantle was just finished last week.

While it is a pretty easy DIY project and an awesome technique I will definitely be trying again, there were some technical difficulties I had to deal with that were beyond my control. (I’ll get to that in a minute.)

This year, I wanted to create a large impact, fall foliage image to center my design around. 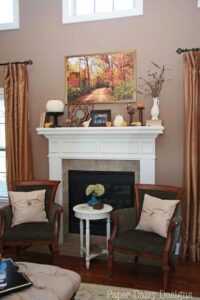 Knowing how much I love the trail and generally try to photograph it during my runs at least once a season, I knew I had some scenic fall shots from the trail on my computer. Just so you know, this image was taken with my iPhone. No fancy, schmancy camera needed for this project. 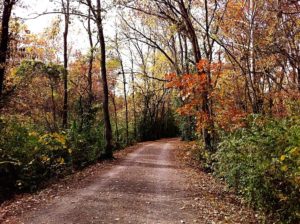 I must admit that this image is the result from editing in Photoshop to be warmer and sharper.  If you don’t have Photoshop, there are all kinds of image editing software available online.

And while this looks nice, I was really after something softer, more like art.

So, while I had it in Photoshop, I ran a watercolor effect on it.

The watercolor effect in Photoshop darkened the image quite a lot, so I lightened it and ran another “warmer” action on it as well.

It’s hard to see at this scale but it’s got a nice watercolor brush stroke or dapple effect to it.

Here’s a close up shot. 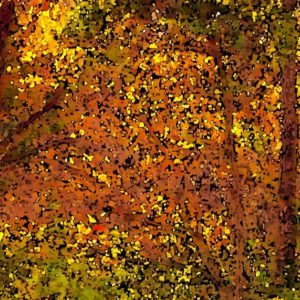 Now that I had my image ready, I started brainstorming for a solution for an inexpensive print to fit in a large frame I had.
This is the same frame I used for my large winter scape in my winter mantle last year. 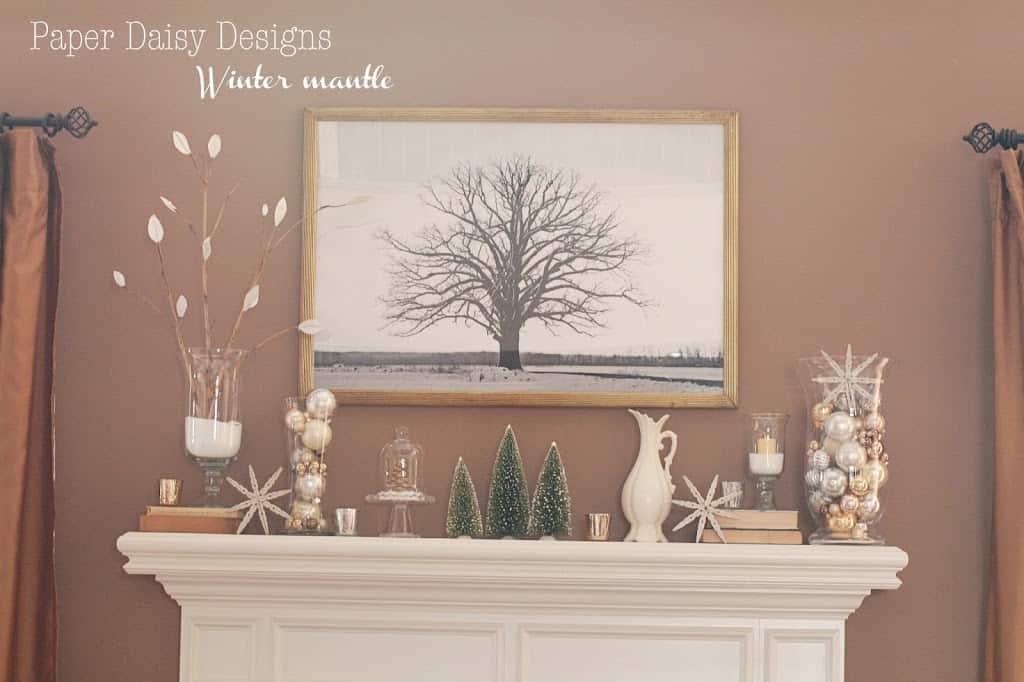 Get the details on how I made that art for only $3.50 in that post.
Only problem with the previous technique?  It only comes in black and white.  In order to get the same sized large print in color, it would cost around $30.  That certainly won’t break the bank, but for a seasonal piece of artwork, my goal was to stay under $10.
I settled on the idea of making color copies/prints of the artwork. In order to do that I had to tile the artwork. It’s a technique I used all the time in my job as a graphic designer for a large trade show company.  When I needed to show a section of a large graphic, to scale, I would simply print the image using the tiled option and then I could piece the artwork together as needed.
Except I didn’t want to waste the color ink in my printer. It’s a good $45 to replace all the cartridges.  I knew it would come out cheaper for me just to send them to a copy center, where they charge around 50 cents a copy/print, at a total of about $6.50 for all of the prints.
The dilemma with that alternative, was to figure out a way to save the tiled files instead of directly printing a tiled image.  Are you with me here?
So, I did what everyone does when you don’t know how to do something, I googled it. I found some great tips, and ultimately figured I could save the files from what I learned.
I worked in Photoshop CS5, but I’m pretty certain you can do this in Photoshop Elements too because it appears to have grid settings.
I want to give credit where it’s due.  So please open another window on your browser and go watch this simple video on how to set up a grid and tile an image. Then come back and I’ll tell you how to save the files instead of printing.  She starts printing around 6:25.
Once you have your grid set up as directed and as seen below, you will begin making your selections at the size you choose, in this case I used the 8″ she suggested.  You’ll notice I had three smaller, 4×8 sized tiles on the right hand side.  I guess I could have re-figured the math for the size of the image, but I was okay with this set up.  My art is 24″ x 36″. 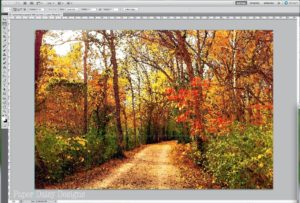 Once you have your selection made, use the crop function under the Image menu. 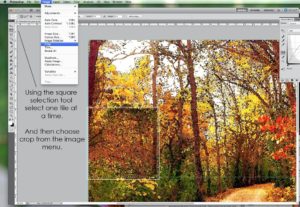 It will look like this.  Now choose Save As.  I would number them when you save them because you’ll likely need to refer back to a certain piece and you’ll have a created a reference.
At first I saved my images as jpg’s, but the print shop I was using couldn’t print those, so I ended up saving them as PDF’s. 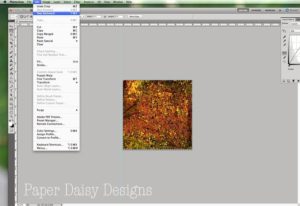 To crop the next section, simply choose Step Backward from the Edit menu as in the image above.
Repeat until all pieces are cropped and saved.
Now send via email or bring all your images to a print shop. Be sure to tell them to print them to scale, not to fill the page with the image.  (The print shop I used was a little lacking in the skill department.  Assume they know nothing and save yourself some hassle)
The first run around with the print shop, I asked for photo cardstock.  If your printer has a decent weight of photo paper, just go with plain paper.  I found the regular, thinner weight of paper to have less of an edge to be seen once pieced together.
Here are what mine looked like after I trimmed them and started to piece them together.  You’ll probably want to use a trimmer or a straight edge and blade to cut them. 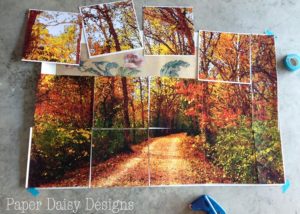 Because this was a frame I already had, I used the poster I had inside as my backing.
You’ll notice I left a small border on some of the edges.  I would recommend doing this to the bottom and right of each image that way you can layer the images over each other neatly.  I didn’t give it much thought in advance. Thankfully the printer I used had made enough mistakes I had extra copies to re-cut.
To adhere the tiles to the poster I used Easy Tack by Krylon.
It was the perfect adhesive for this project. I had a scrap piece of cardstock off to the side where I would spray each piece before placing down on the poster. If I didn’t line up the tile perfectly the first time I could easily lift it and replace it.  Yet it is firmly attached to the poster now.
Here’s a close up of the image together in the frame. 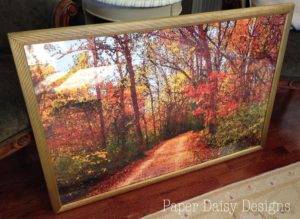 I must admit I didn’t know if you would really be able to see the tiling or not once it was done.  I honestly wouldn’t have minded either way.  But you have to look very closely, at just the right angle, to see a square or two now.
I’m pretty certain if you had no idea how you made it, you wouldn’t be able to see the tiling.  But I would imagine that the variation in color of the image I used made a big impact on how much you could see the seams.
Here’s another look at it in place. 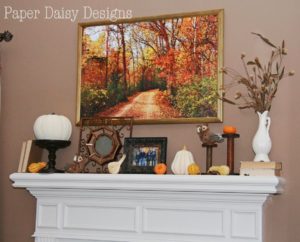 Of course, now that I have a perfect fall artwork, I’m thinking of what other image might be nice for the spring next year?

If this was as clear as mud and you’ve got questions, just leave them in the comments.  I’ll be happy to answer them, because getting an extra large piece of art for under $7 is a pretty awesome deal. 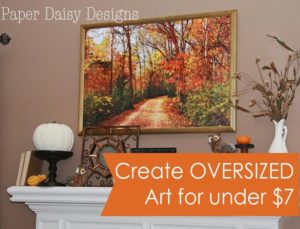