This spring our church partnered with Habitat for Humanity to build a home for a wonderful family. It was an exciting experience to participate in, even in a small way.  Our family was only able to work one Saturday, but as soon as the partnership was announced I had a little tug in my heart to build something special for this family.

It didn’t take long for me to settle on the idea of a faux fireplace as our gift.  Not only would a fireplace add a nice focal point to the living room, I had one particular event in mind.  You see, the homeowner has several small children and come Christmas, I wanted them to have a place to hang their stockings.  One of the special memories we cherish from Christmas when the children were younger was the joy on their faces when we lifted the stocking off the mantel and they gleefully, dumped the contents to reveal what special treats Santa had tucked inside.

At the kick off event, I spoke to the homeowner about my idea and she was thrilled.  She totally embraced the idea, rough as the specifics were at the time, she put her trust me and I was so happy.

The day we volunteered we took some measurements and came up with a general plan.  One small obstacle was going to be the location of the cable outlet.  So, we designed the firebox to fit around, it allowing the cable to go up through the fireplace so that the homeowner could hang a TV above the mantel if she wanted to.

In advance of the installation day, I cut and washed all the boards. To keep costs down and because untreated cedar fence boards seemed to be my “go to” product for my projects, that was the wood of choice.

The boards were cut to 66 1/4″ and washed rather simply with watered down paint, Sherwin Williams, Natural Choice.

To build the mantle, I used the same design and techniques I did for my outdoor faux beam mantel. You can read the complete tutorial for building this mantel. 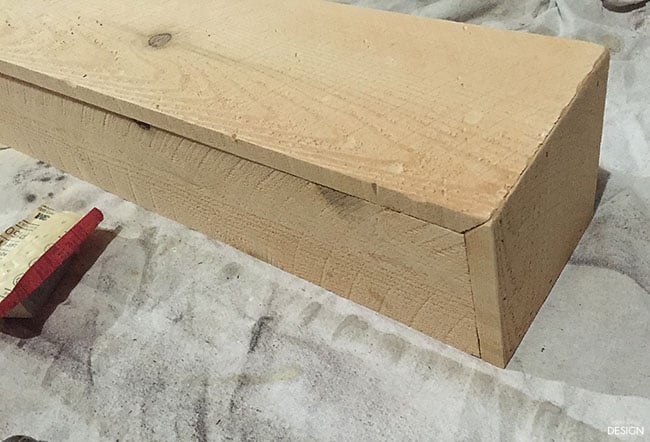 I had asked the homeowner about the stain for the mantel and she wanted a finish that coordinated with her cabinets, so I used a Walnut finishing cloths stain and aged it with just a bit of Weathered Wood from Varathane.

So fast forward to the day of the dedication when she took possession of the house, we returned to with the supplies to build her the faux fireplace and mantel right after everyone left. We brought along as many of our portable tools as possible.  We didn’t have an exact measurement for the 2×4’s that would fit the height from floor to ceiling.

After they were cut to size we found the studs and nailed 2×4’s directly into the studs. 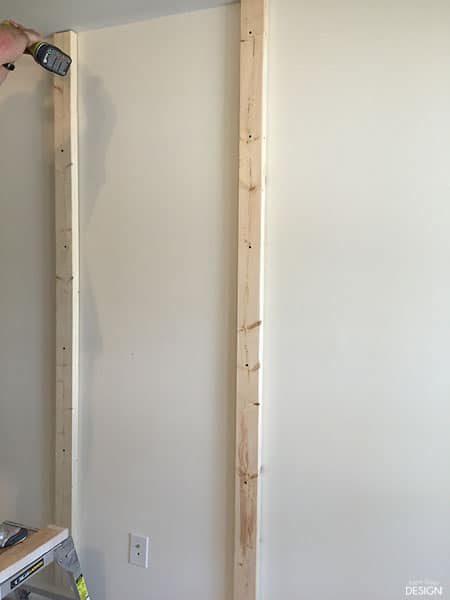 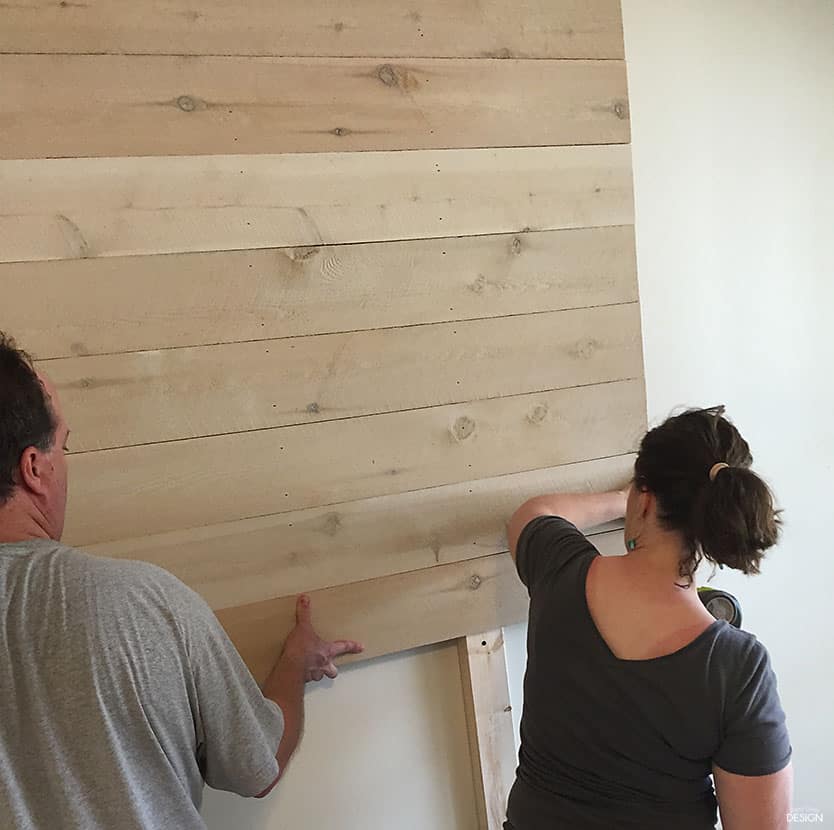 And then, using wood screws, hung the 2×4 that would serve as a cleat for the mantel. 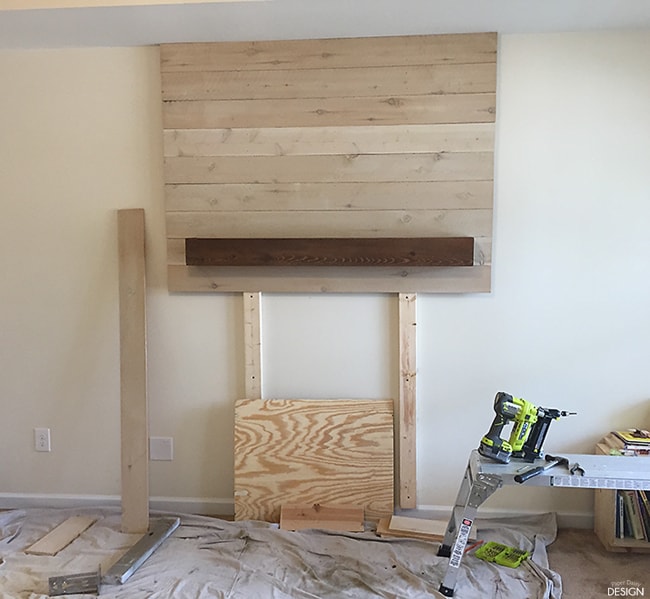 So, I returned a few days later with the corrected side panels and finished out the fireplace. And the best part?  When I needed an extra hand the homeowner helped me finish the job!   Two women, building a fireplace. That was cool.

We finished the sides with fence panels that had been ripped on the table saw to act as trim, nailing into the edge of the front boards. The fence panels we used were a great to work with and really good quality so I hope they last a long time! 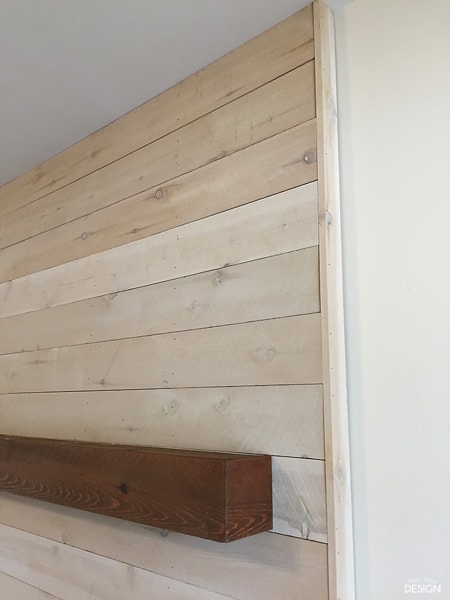 Then we hung the mantel by screwing through the top of the mantel, into the cleat.

The firebox fits inside the 2×4 supports.  I cut out a hole for the cable and covered it with “firewood”. 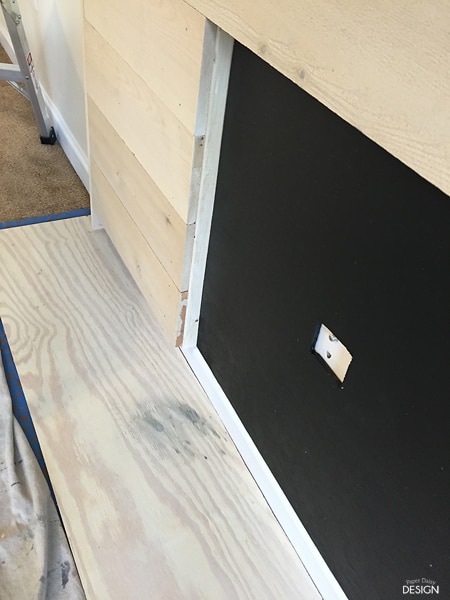 Once the side shiplap boards were in place, I taped and painted out the edges as well as the sides of the exposed 2×4’s that acted as the supports in the same black.  This created a bit more depth for the box itself.

To give a more realistic look to the whole project, I created a hearth using remnant tile on top  of 1/4″ plywood. I adhered and  “grouted” the tile with coordinating sanded tile caulk. 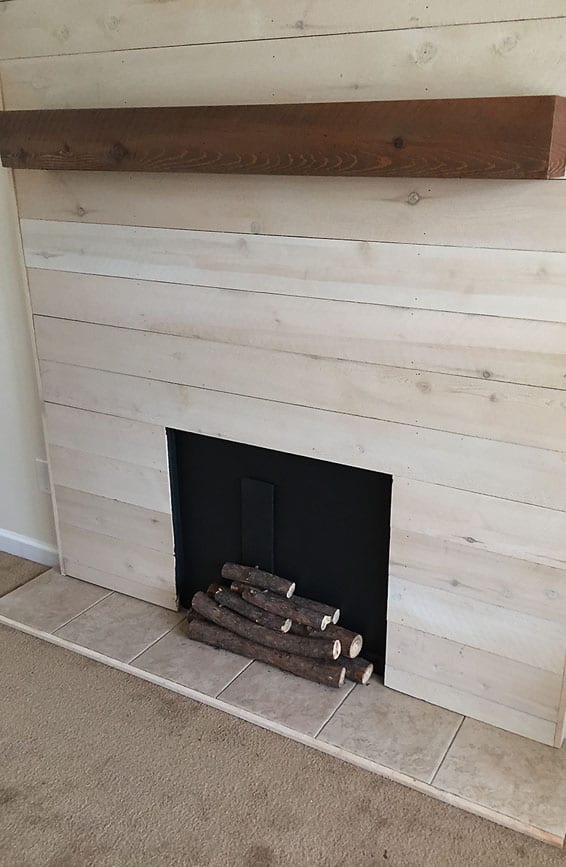 I finished the edge with a scrap piece of fence board.

If you look closely, you can see the extra piece of wood I brought to hide the opening for the cable.  For security, I nailed as many of the log pieces in place as possible.  I mentioned to the homeowner that I would be happy to come back and do whatever was needed to hide her cable.

And of course we needed some firewood, so we trimmed some branches from a fallen tree in our woods up the hill> The size was perfectly proportional.

There you have it, a faux shiplap fireplace with a beam mantle and tile hearth!

Since the homeowner was just beginning to move in, I remembered to grab a few items from my house to stage it up for the blog. Wink, wink!

Here’s the bit of info that might excite you if you wanted to build your own.  The estimated cost breakdown.

6 tiles $12 (We had some remnant tiles laying around)

But honestly, I had never really added up the cost until now.  It was just a project that God placed on my heart and I was going to find a way to complete it.

But the fact that this turned out to be an inexpensive project makes me happy because hopefully if you desire faux fireplace and mantel in your home, you’ll be inspired to build one like this! 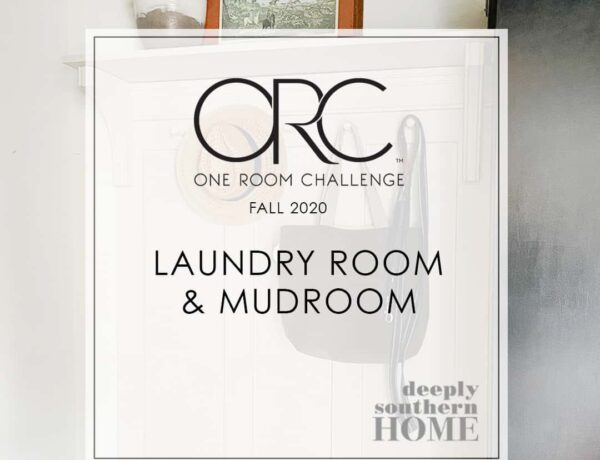 How to build an Organic Raised Bed on a Sloped Yard