If you’ve been following our renovations with #theTrailHouseReno, then you are probably wondering how we’ve already gotten to week 3? Well, I am wondering the same thing. Some days it feels like a great deal has happened and other days it still seems like we are eons away from being close to finishing and actually moving in.

Either way, I wanted to share some progress photos with you all.  I hope to do this on more of a weekly basis from here on out. 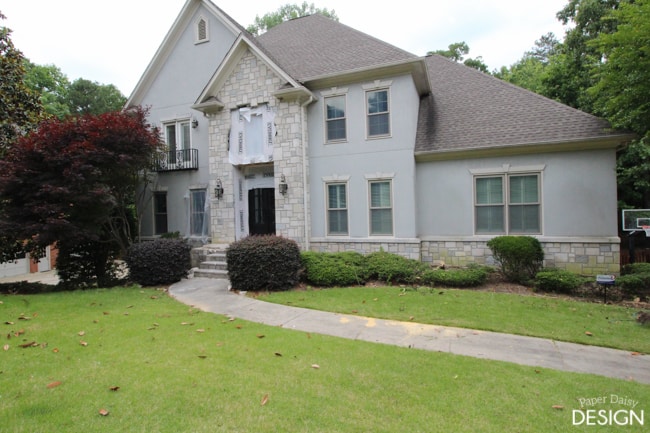 When I shared the Trail House Before Video Tour, we were 2 1/2 weeks out from the closing. Today the front of the house looks like this.  On Mother’s Day, the new iron front door was installed. I’d say that was a pretty nice Mother’s Day present wouldn’t you?

The new door is partially covered in house wrap until the rest of the construction takes place.  The dated stained glass window was removed and framing began for a new, smaller window. 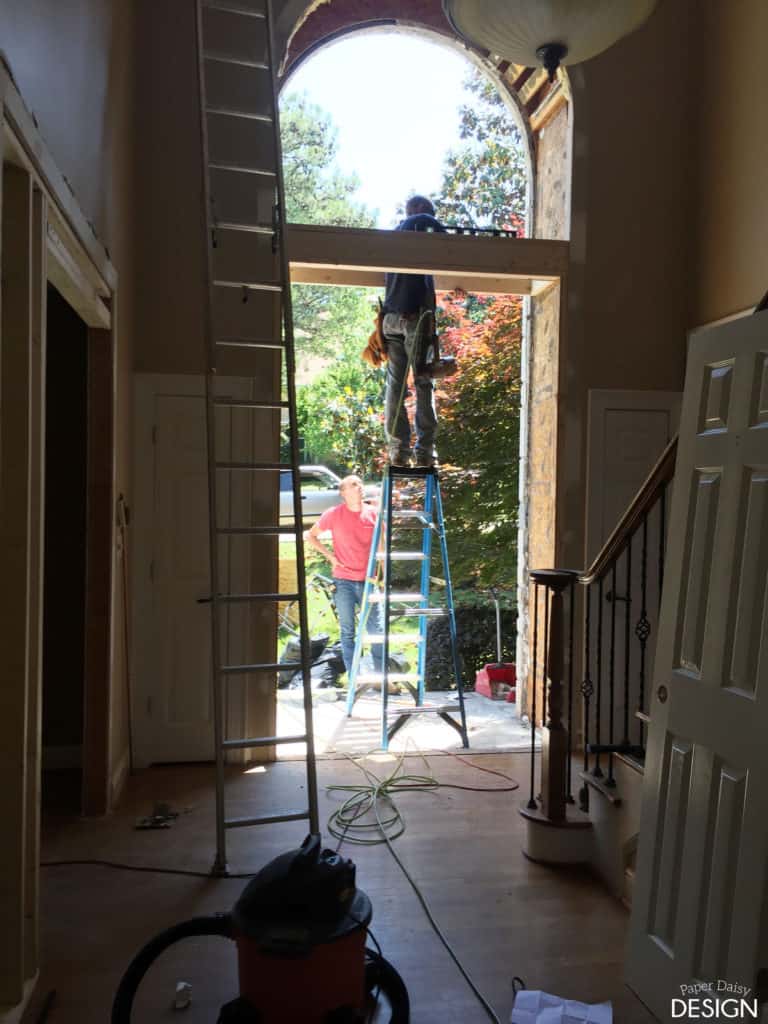 If you follow me on Instagram, then you saw that the huge maple tree was trimmed to remove the branches that were on the house. This severe trimming may be the tree’s demise, but this necessary measure also uncovered the Juliet balcony and allowed much needed daylight to pour into the dinning room.

Also outside, the back of the house looks like this. 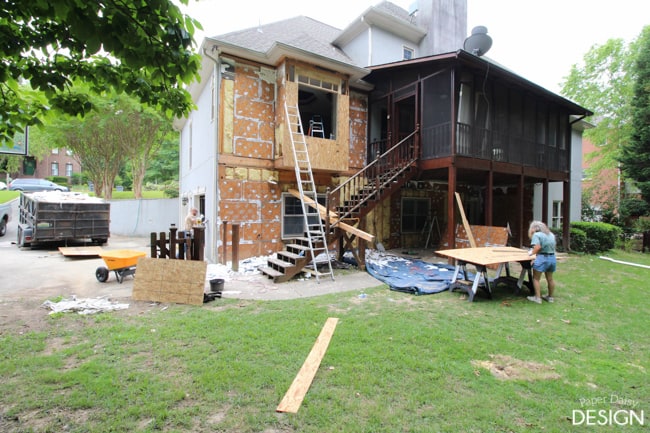 Our mason, who was initially set to begin work this week, is running behind schedule. Just the first of many delays I’m sure.  So, we hired our inside contractor to take over the demo part of the outside Dryvit/EIFS removal.  Hopefully, this change will help keep us closer to our original timeline.

The removal process for Dryvit is very tedious and slow.  I told Richard, as he began working on it over the weekend, that it was not unlike picking on big nasty scab!  He was tickled by my disgusting analogy and so were all the other guys.  The outer shell that gives it the appearance of stucco is a hard sheeting type material. After that is ripped off, then there is a layer of styrofoam attached with nails. 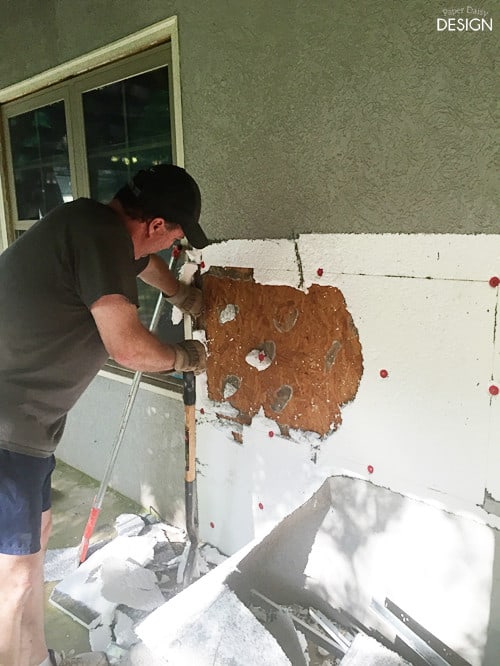 After all of that is removed, then we determine which boards have damage and need to be replaced.  The back side of the house will eventually be clad in Hardie board siding.

On the inside, there are multiple projects going on at once.  Namely, framing and reframing areas, electrical work and now we are waiting for drywall installation.

In the foyer, the opening to the study is being made smaller to accommodate a pair of antique French doors. 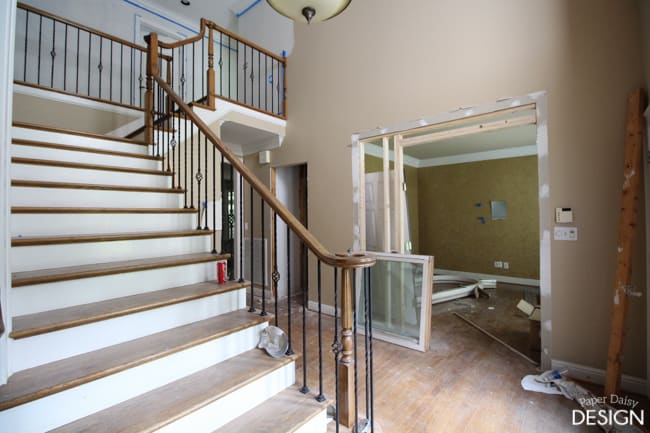 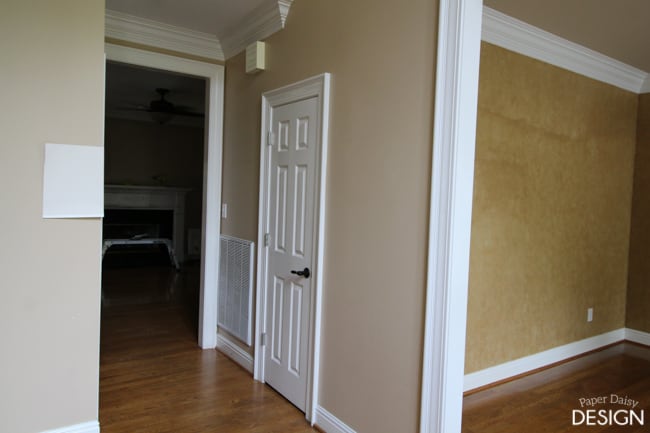 The door you see above was for a closet which we removed and is now a relocated the entrance to the powder room. The old entrance, below, was on the opposite side of the house across from the master.  This was the one place I felt like the floor plan was off and in order to make the change you will walk through a tiny hall or vestibule to get to the bathroom. It may sound odd now, but I think it’s going to be something really special when it’s done. 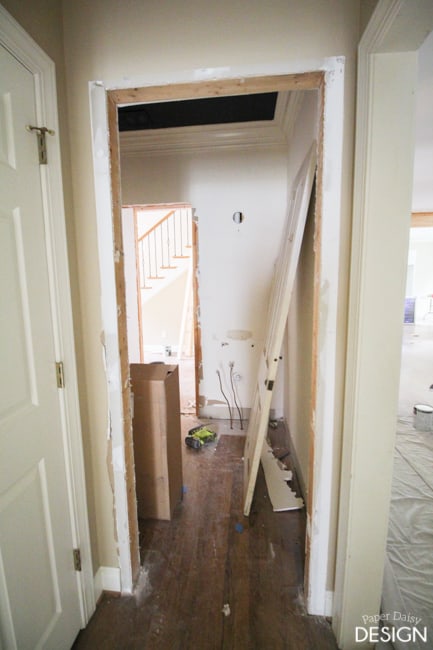 In the area between the kitchen and the family room, the larger opening has been framed.  Thankfully, this is not a load bearing wall, so adding a new header was all that was necessary.  It is amazing what removing cabinets and opening up a space just 2-3 feet can do. 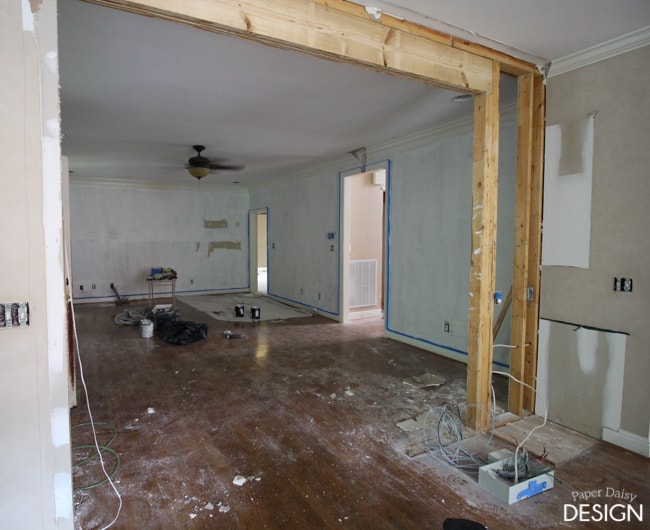 This also allows more light to come into the living room from the large kitchen window.  Painting the room a nice white (Alabaster from Sherwin Williams) also helps the room feel brighter.

The master bathroom is completely gutted and a new, larger window has been framed in.  It’s totally open in this photo so that the workers could remove the Dryvit from around the old window. 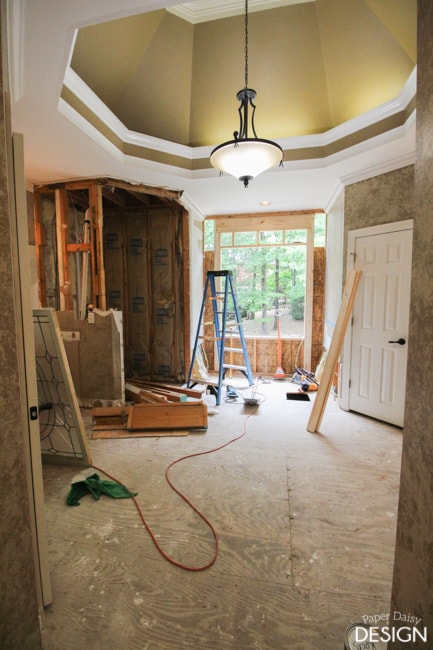 Opening up the cave like shower allows light to spill into the left vanity side of the bathroom too.  And yes, we get to work with some fun angles again on this bathroom remodel. If you want to see our previous master bathroom renovation click here. 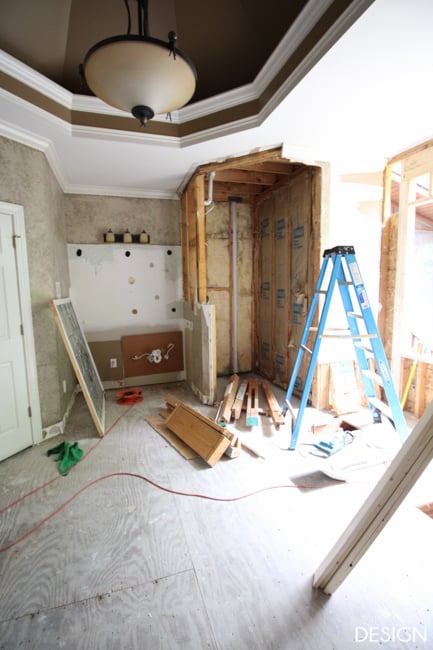 Upstairs the focus has been painting. We are working towards having this part of the house ready for new flooring to be installed soon. 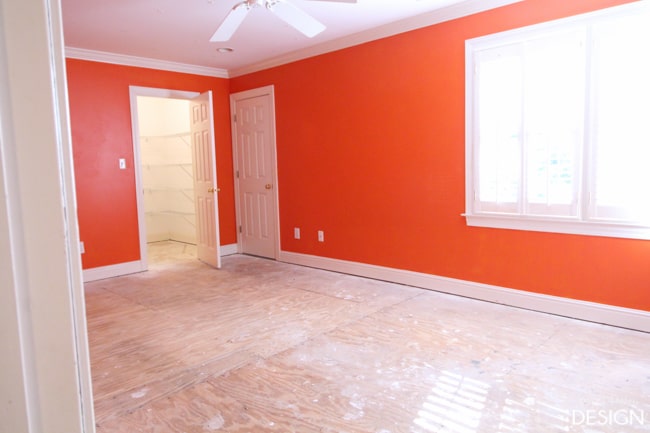 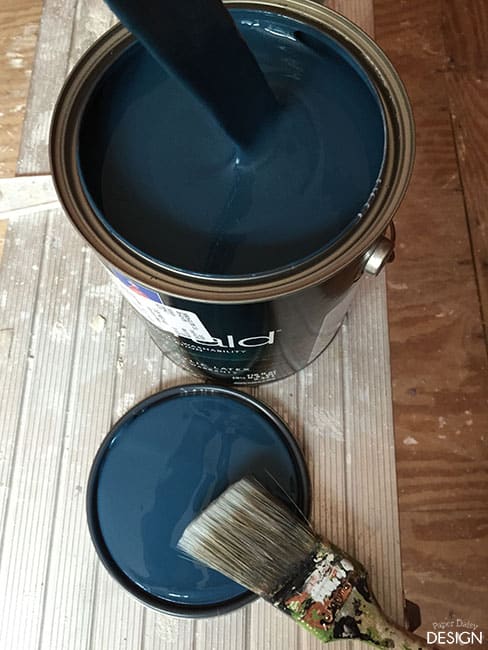 Last week in the basement, Richard and Miles destroyed the drop ceiling. So basically, the whole house is a disaster zone. 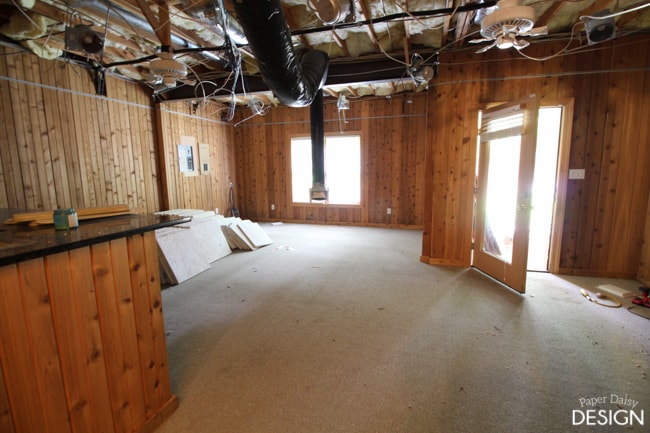 Even the backyard has seen some renovation action.  The patch of gravel you see here was once something of a patio we guess.  The little retaining wall was already there, but the bare ground in front of it was not level.  We had our contractor bring in a bobcat and flatten the area out and pour small gravel as a base for stones. We had hoped to recycle the stones from the front of the house to here, but that plan may not work. The initial removal of the stones for the area around the window didn’t go so well. Time will tell, I guess. 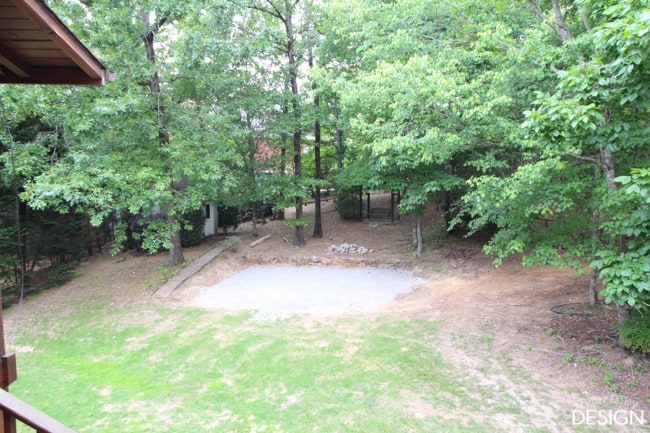 The one spot we all find ourselves retreating to when we’ve just had enough is right here.  This swing under the trees is a quiet and relaxing spot. In even just this short amount of time, I find myself starring back at the house wondering what it will be like when the majority of the work is done. Because we all know a house, at least my house, is never done. 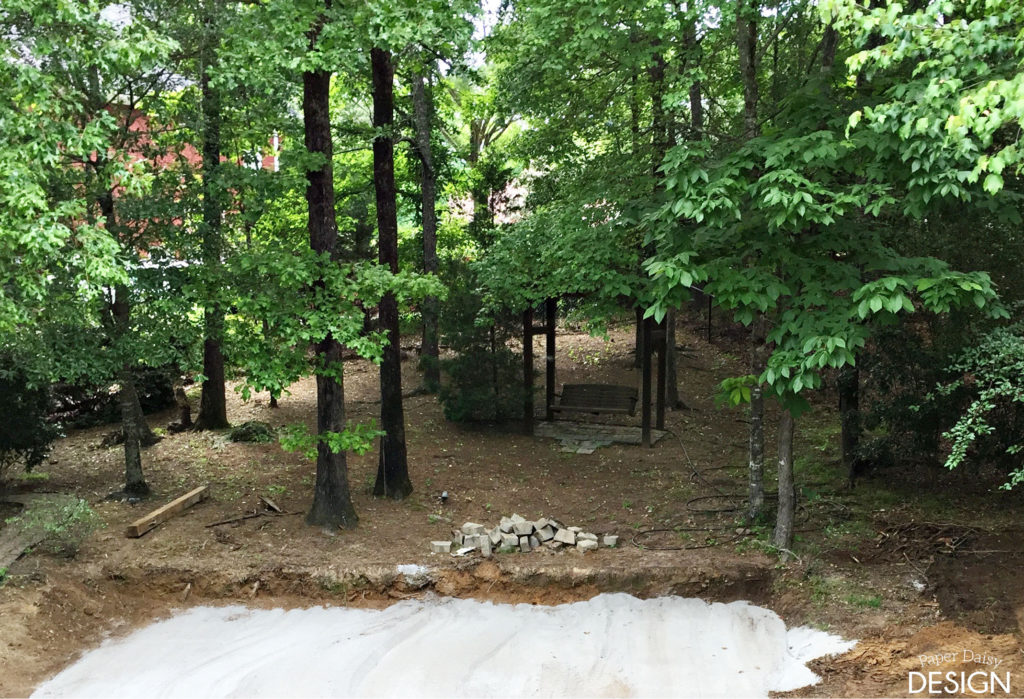 That about gets you all up-to-date.  It’s exciting and exhausting all at the same time.

Next Tuesday I’ll be back with an update and hopefully a few peeks into some of the design plans I’ve been working on. I hope I can give you a glimpse into what is in store for our Trail House.

I’ll be back in the next few days with a fun project we worked on before this craziness began! 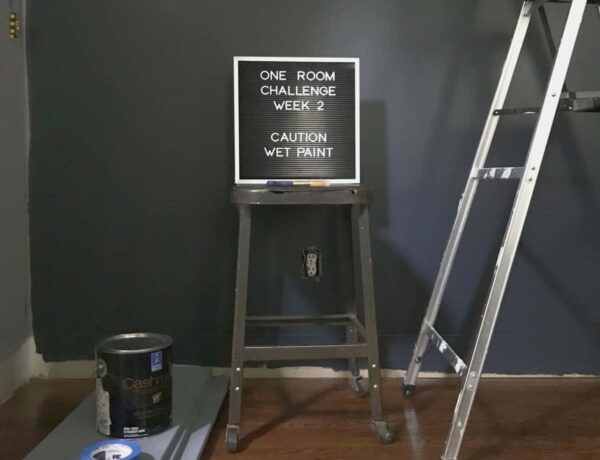 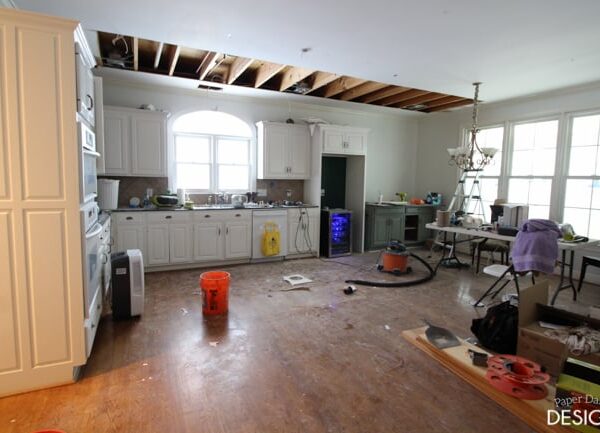 National Clean Up Your Room Day & Last Look into the Bedrooms