I almost felt like there wasn’t much to share for this week’s update, until I looked back over the photos from last week. Some key elements are coming together inside and we had some good news on the outside.

So, let’s start this week’s recap inside. The new arched window was installed and framed. It is hard to see from this photo, but the sides have a slight angle to allow as much light in as possible. 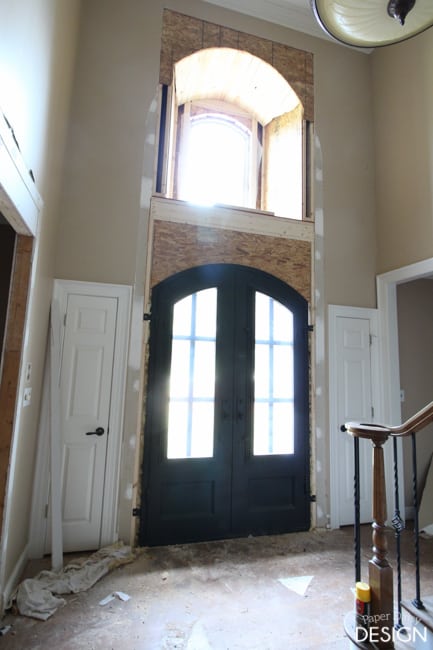 The inside of the door was framed up in preparation for sheet rock.

I must admit deciding how to frame this window was quite a challenge for both my contractor and me.  A good deal of discussion and some horribly drawn sketches were hashed over until both of us were on the same page.  I’m so thankful he is patient with me and eventually we found a balance for what works best. I couldn’t be happier with the outcome and the execution of my vision.

I was a bit worried the smaller window, but larger door would make the foyer seem darker, but the light seems more balanced now.  I don’t think I ever showed the foyer from this side before. 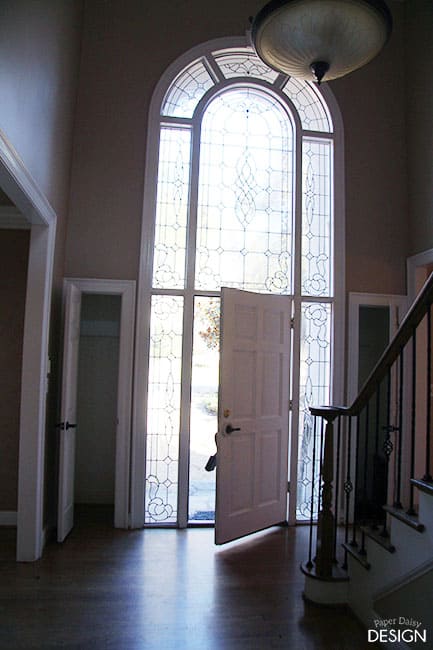 I think the reason the light is just as substantial now is because the upper window was reposition to the outside of this facade instead of inside an arch. Now only the door is under the arch, so even though the windows technically have less glass surface, they allow more light in.

The french door to the screen porch was installed this week too. An infinite improvement from the disgustingly rusty door that was there. We also took the opportunity to adjust the swing for better flow from inside to outside. 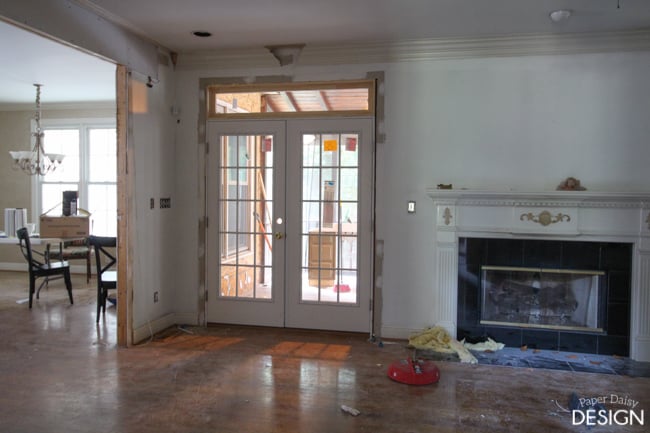 Slowly working our way around the house, we finished painting the master bedroom.  Obviously, we still need to paint that brown “space ship” up there!  My hope is that once it is painted white it will feel less 90’s and more spacious. In an ideal world we would have reconfigured this into a true vault, but we just couldn’t justify the mess, time and money that would need to go into reworking the ceiling. 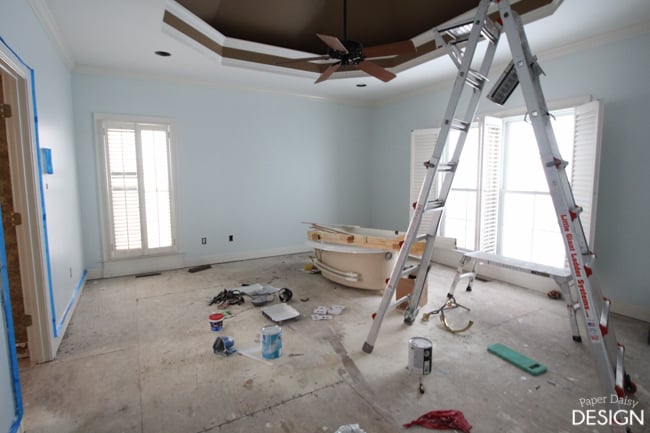 What do you think? Would you have gutted it and started over? There’s no denying the lighter wall color, Topsail from Sherwin Williams, is a huge improvement.

Outside, the Dryvit is almost completely removed and the house has been wrapped. 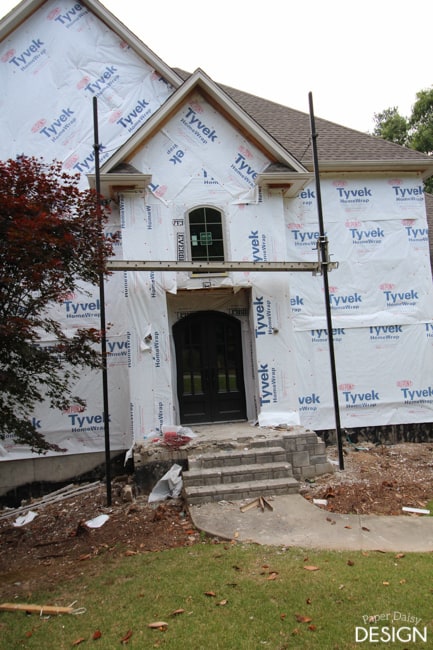 Thankfully, I can report that our worst fears have been avoided.  The major damage everyone was so afraid of  concerning this house was easily repaired and the wood replaced without much difficulty. Rotted boards around the the rest of the house were minimal and also easily fixed.  The only place left to really uncover is the very top of the chimney. 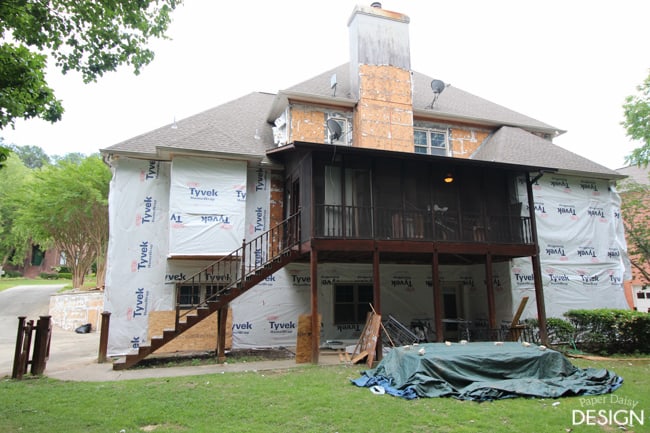 Actually, we were quite surprised with how good the lower portion of the chimney looked. (The pile covered with a tarp is the Hardie Plank that will go on the backside of the house.)

Being the ultimate recycler, we now have a huge pile of stones to create a courtyard in the backyard. 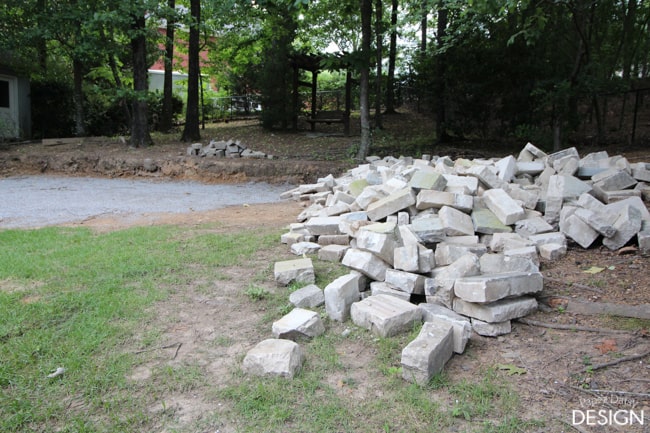 I don’t even want to think about how much this amount of stone would have cost.  The only difficulty with the installation will be that each stone is not the same depth.  That was quite surprising to us, given the way it appeared when it was on the front of the house. When the mason finally shows up, hopefully this week, we will get his opinion on how to proceed.

That about wraps up this week’s update. Hopefully next week the guys will get to the electrical and the drywall work because move-in date is fast approaching. I will be tackling some more rooms with paint and will soon move to tiling! 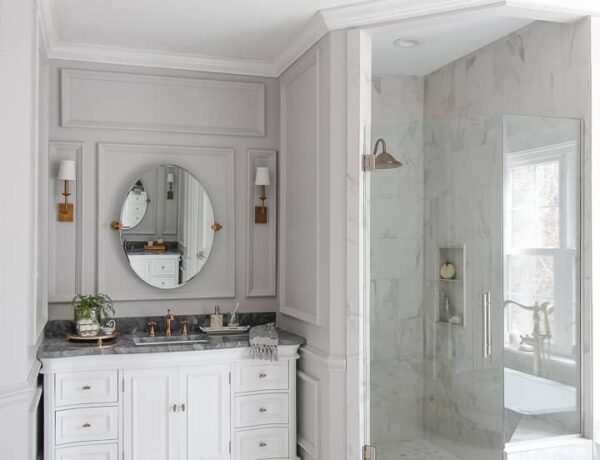 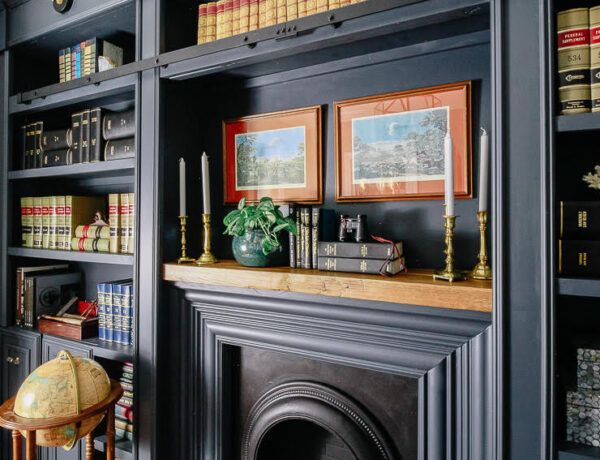 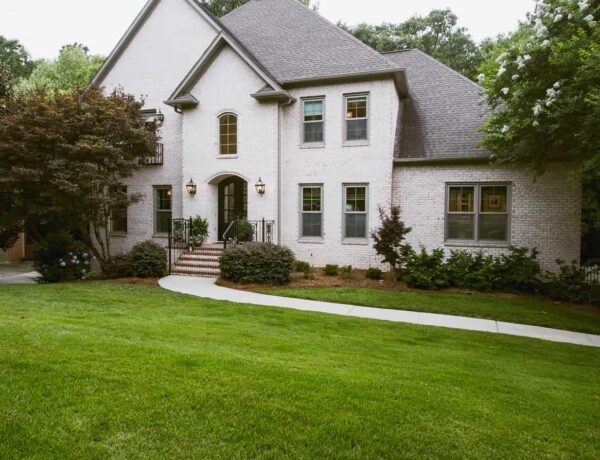