It’s time again for another update on the One Room Challenge.  My goodness, it seems like another week came around rather quickly. 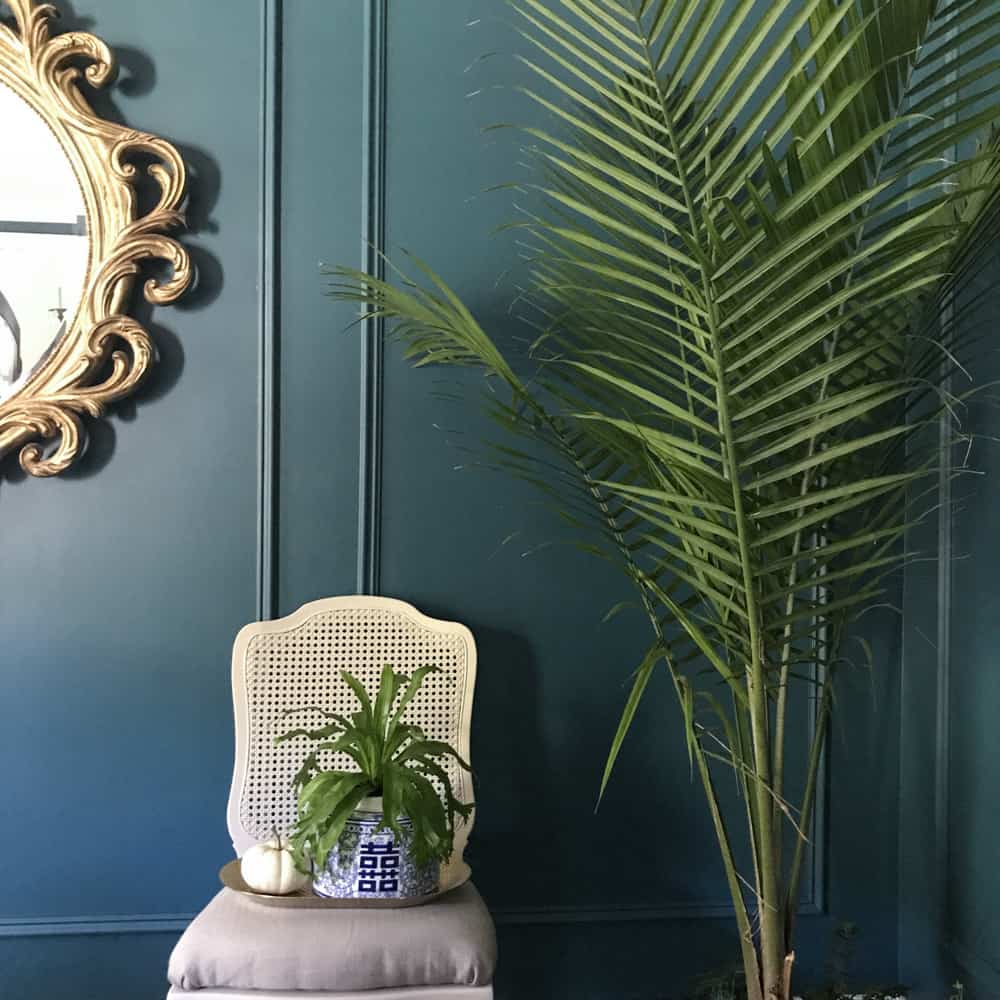 I think that was partly due to the many DIY’s that fill my list for this room were derailed by another project I committed to long before I decided to join this fall’s ORC. But not to worry, with that deadline behind me I am moving full steam ahead.

As I mentioned last week, the replacement side boards arrived and I got them assembled. They arrived flat box style and unlike IKEA furniture there were written directions, but the labeling was awful or non-existent. I’m not going to lie, it was a serious challenge! There were so many itty bitty stickers and stamped letters on plastic bags that were hardly visible.  Thankfully, I learned from my mistakes and the second cabinet went together easily. 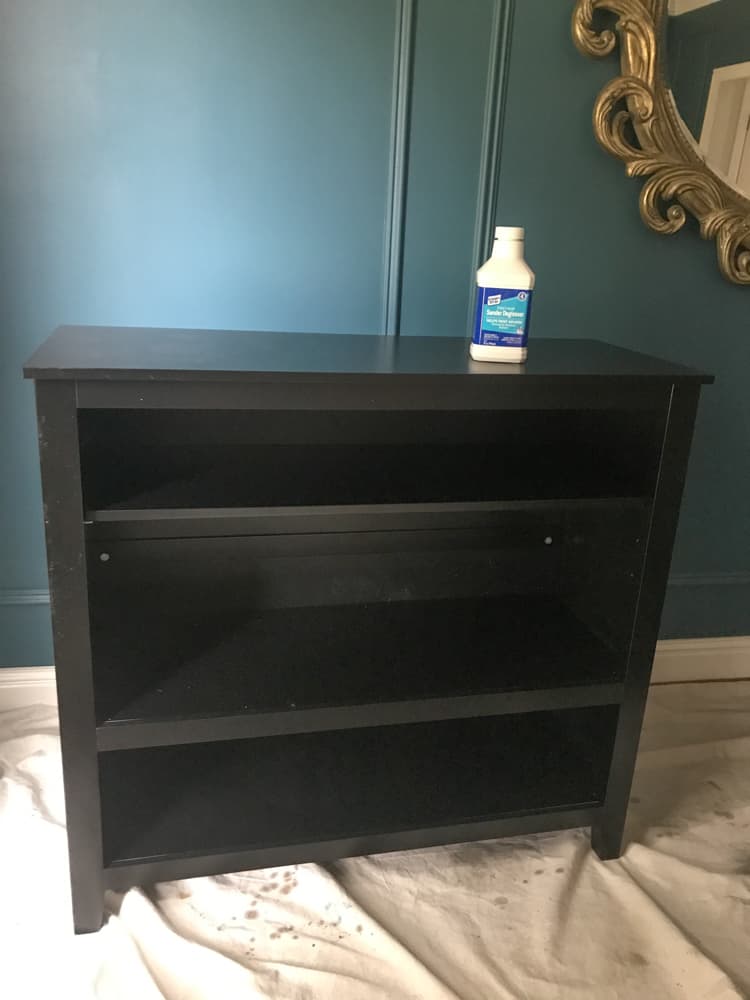 Then I began giving them a paint treatment. 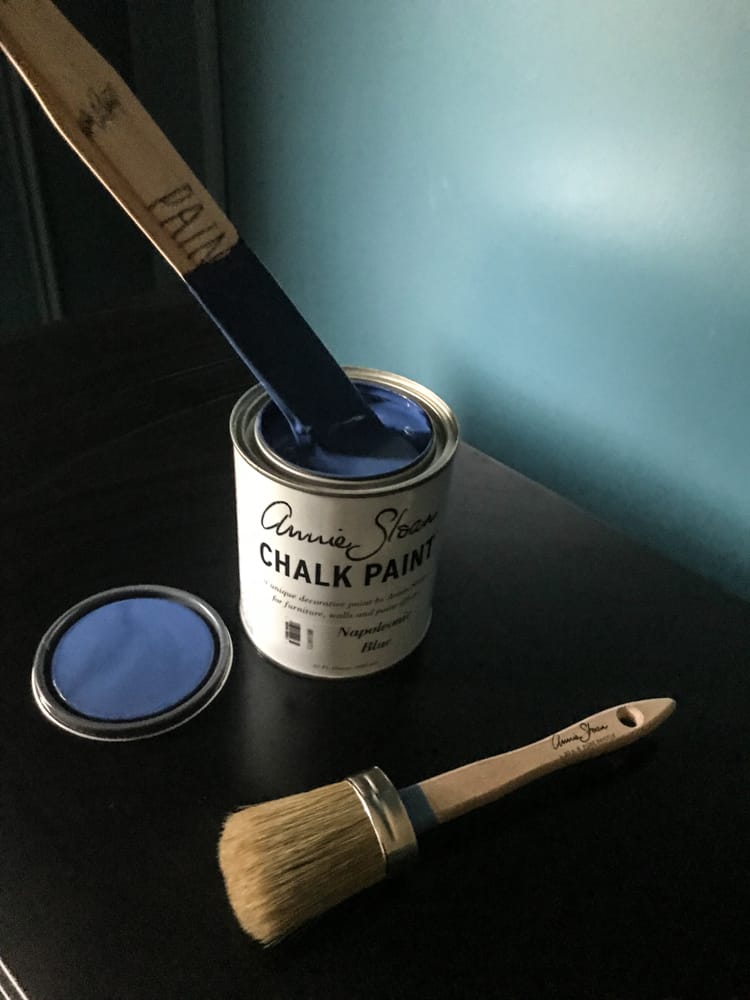 I used Annie Sloan chalk paint in Napoleonic blue. I hope to create a lacquer-like finish in addition to more glamorous hardware.  I was lucky enough to get tips from Annie herself a few weeks ago! I am excited to see how it turns out.  (I was provided this paint and a couple brushes from Annie Sloan for review.) 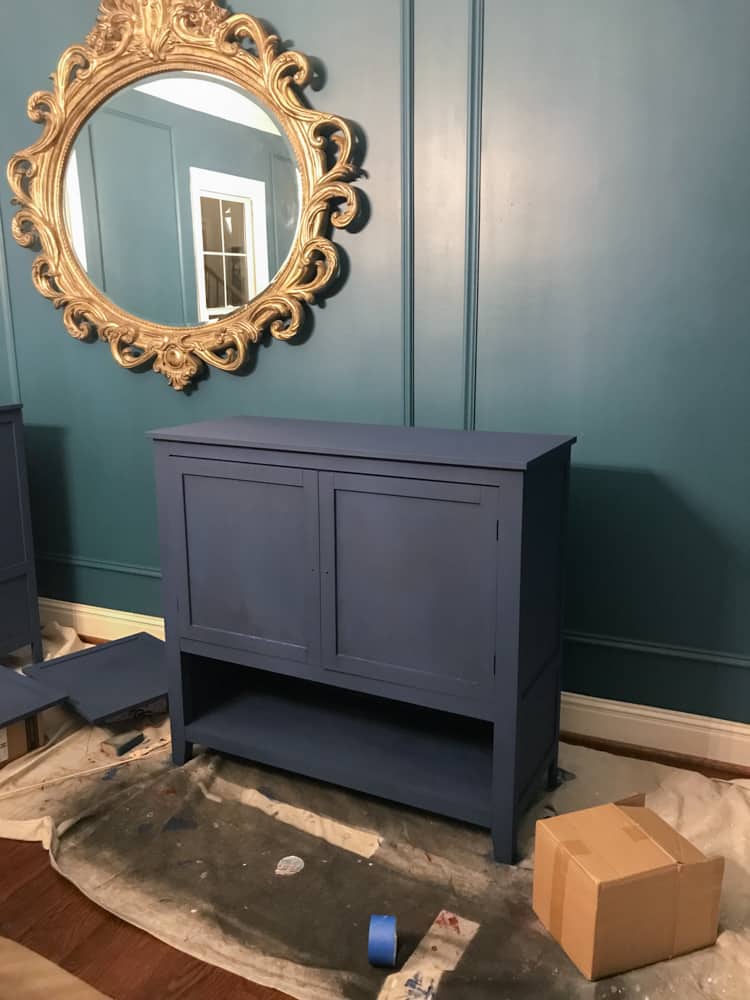 This is what it looks like after two coats of paint but no wax. The color should darken once waxed. (But you can see from the photo below the color blends nicely with the rug.)

While friends were visiting this weekend, we had extra hands to get the rug pad and the rug under the massive slab table.  I am extremely happy with the selection. The colors are perfect for the vision I had of the room even if it isn’t the dreamy way-out-of-my-budget rug I was almost ready to sell a kidney for. 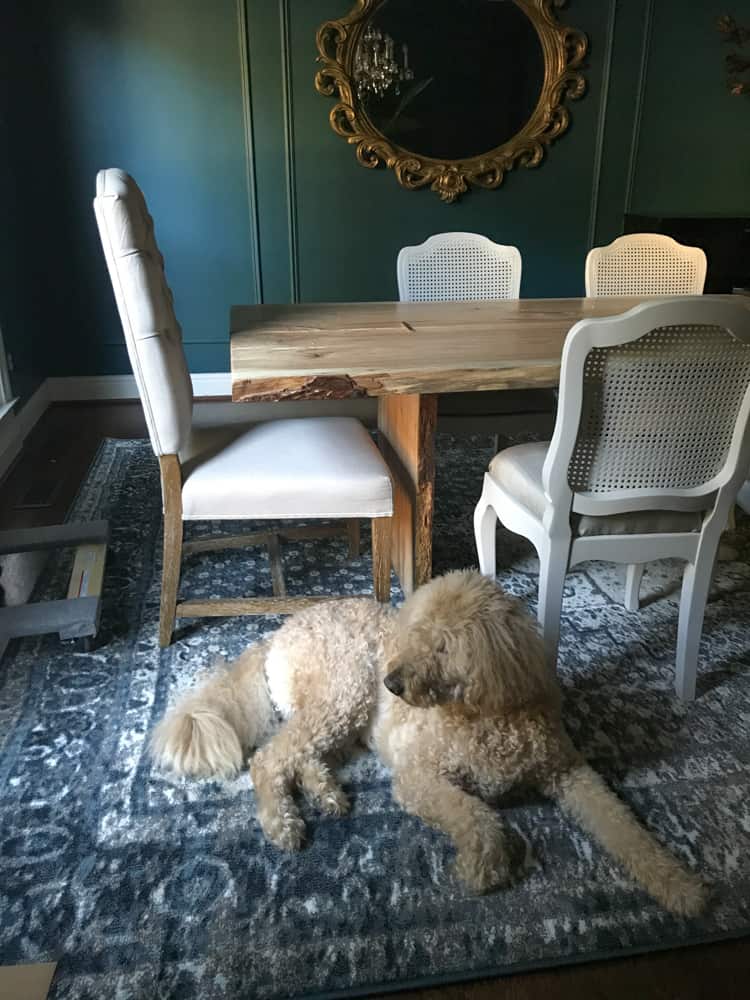 Tucker, my incessant photo bomber, is demonstrating how the new rug has created a cozy spot for him to sit and watch the neighborhood.

I also had my friend help me remove the metal ornamentation on a table that was living in our foyer.  The goal is to transform it into a wine bar or dry bar cabinet.  I forgot to take a before photo, so this one is from last Christmas. 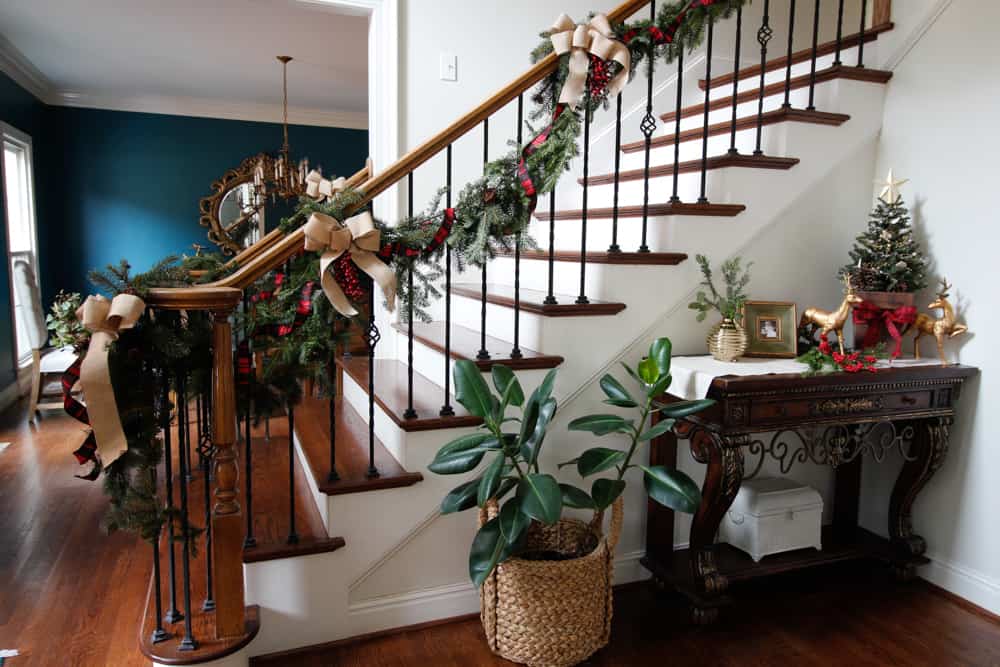 Creating a place to store wine and and barware gives the small wall behind the stairs a purpose and allows for more prep space while entertaining.

Here are a few inspiration photos. I like this one from Pottery Barn, but it made sense to use a piece of furniture I already had but wasn’t functioning well in the foyer.

But, this West Elm Bar Console offers the wine glass storage I was hoping to create. I realize that neither of these are like what I have to work with, but purposefulness of the design is what I wanted to mimic.

And here is what it looks like now. You can see now that the ornamentation is gone I have room to hang wine glasses and such. 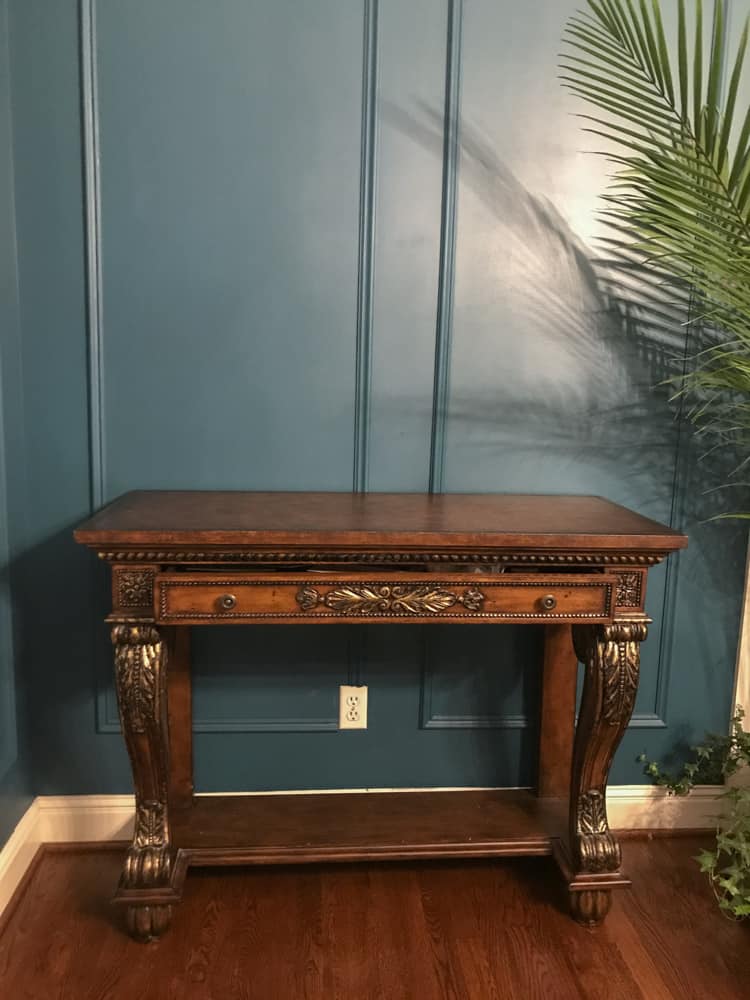 I will share more next week when the pieces and parts I’ve ordered come in and are installed.

And the last DIY to complete, unless I get another crazy idea is to sew curtains.  I have not been in a rush to get that project started as I am still waiting for the curtain rods to arrive. They should be here by Friday. 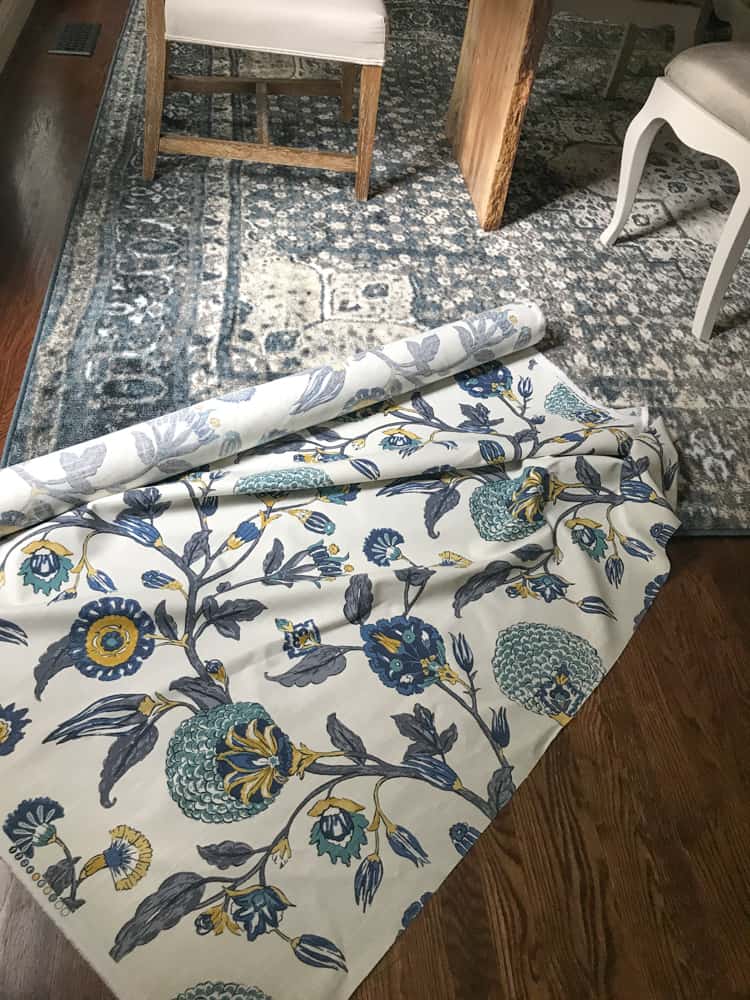 So, that’s the recap of the numerous DIY projects I’ve still got in the works.  Despite feeling like there is a great deal left to complete, it feels attainable to me even if we were originally supposed to reveal the room next week.

Be sure to check in here to see how the other Guest Participants are fairing.

It also appears the Featured Participants are well on their way too! I just wish I had time to read every little detail! 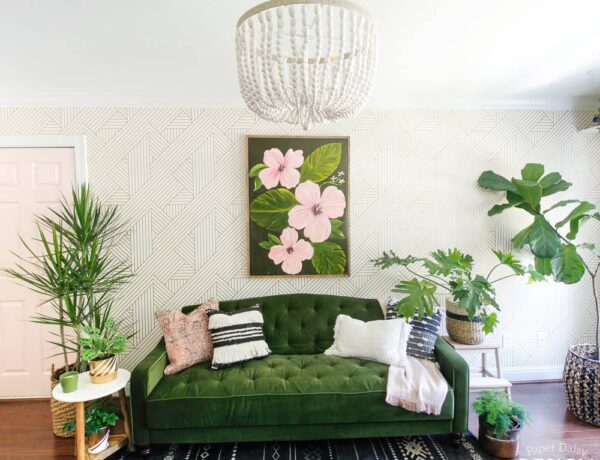 One Room Challenge//Week 4, Moving Along